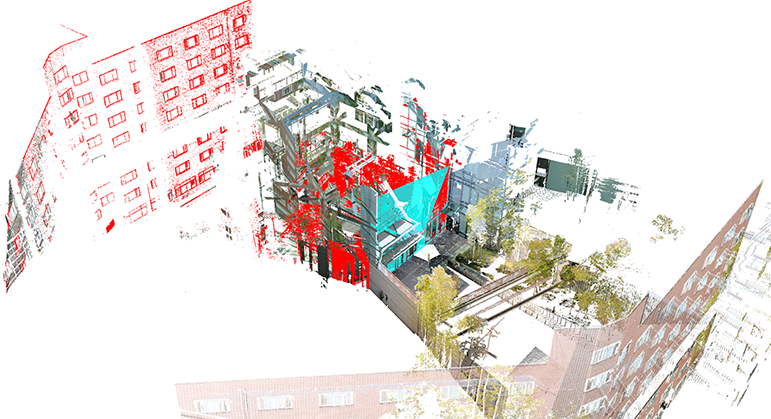 A LS3DPC model where the virtual points caused by glass reflection are detected in red and the associated glass plane is shown in cyan.

Large-scale 3D point clouds (LS3DPCs) captured by terrestrial LiDAR scanners often include virtual points which are generated by glass reflection. The virtual points may degrade the performance of various computer vision techniques when applied to LS3DPCs. In this paper, we propose a virtual point removal algorithm for LS3DPCs with multiple glass planes. We first estimate multiple glass regions by modeling the reliability with respect to each glass plane, respectively, such that the regions are assigned high reliability when they have multiple echo pulses for each emitted laser pulse. Then we detect each point whether it is a virtual point or not. For a given point, we recursively traverse all the possible trajectories of reflection, and select the optimal trajectory which provides a point with a similar geometric feature to a given point at the symmetric location. We evaluate the performance of the proposed algorithm on various LS3DPC models with diverse numbers of glass planes. Experimental results show that the proposed algorithm estimates multiple glass regions faithfully and detects the virtual points successfully. Moreover, we also show that the proposed algorithm yields a much better performance of reflection artifact removal compared with the existing method qualitatively and quantitatively.

Results of the proposed algorithm. (a) Input LS3DPC models. (b) Panoramic images and the reliability maps of the glass regions. (c) The estimated multiple glass planes. (d) The detected virtual points. (e) The resulting LS3DPC models where the reflection artifacts are removed. From top to bottom, `Terrace,’ `Engineering Building,’ `Corridor,’ `Lobby,’ and `International Hall’ models.